“The Flight Attendant” is full of traps.

There are literal traps, of course —  this is the series that gave Michelle Gomez (here playing hardened killer Miranda Croft) a switchblade and let her loose on Bangkok, New York City, and Rome. But most of the drama takes place inside the head of protagonist Cassie Bowden (Kaley Cuoco), exploring the trauma of waking up next to the newly murdered corpse of a one-night stand named Alex Sokolov (Michel Huisman), as well as the psychological baggage she’s been carrying around for years. This presented production designer Sarah K. White with a challenge, because while all that sounds good on paper, how do you represent it visually? How do you balance serious issues of grief and internalized trauma with the show’s dark but definitely comedic tone?

The answer lies with The Master of Suspense.

Nods to Hitchcock are all over “The Flight Attendant” and many of them are easy to spot. The show delights in wipe transitions a-go-go across the globe, a score that seems closer in its propulsively playful style to a Bernard Hermann than it does to a Bear McCreary, to say nothing of the show’s Saul Bass-inspired opening credits. But by simply looking at the hotel suite in which Cassie wakes up, and then mentally returns to as she tries to unravel the mystery of who killed Alex, you will start seeing all the ways she finds herself trapped.

As she panics and tries to clean up the crime scene, Cassie is framed inside a set of interior columns that evoke the bars of a cell. Fragmented sculpture pieces and tiling on the walls can’t help but clash with the polished surfaces, creating a sense of disorder and turmoil just beneath the surface. The large glass windows, which should offer a glamorous view of the Bangkok skyline, all bounce a reflection of Alex’s corpse back towards Cassie, wherever she finds herself in the suite.

“It was satisfying to me as a designer to be able to work with broken symmetries and reflection and refraction,” White said of the space. From its strong architectural lines to bland hotel art (no matter how luxurious, maybe best to steer clear of a room with depictions of human bodies in the plural?), the murder suite of the “The Flight Attendant” helps the show twist the knife, emotionally speaking of course, and ramp up the audience’s anxiety for the peril Cassie finds herself in. 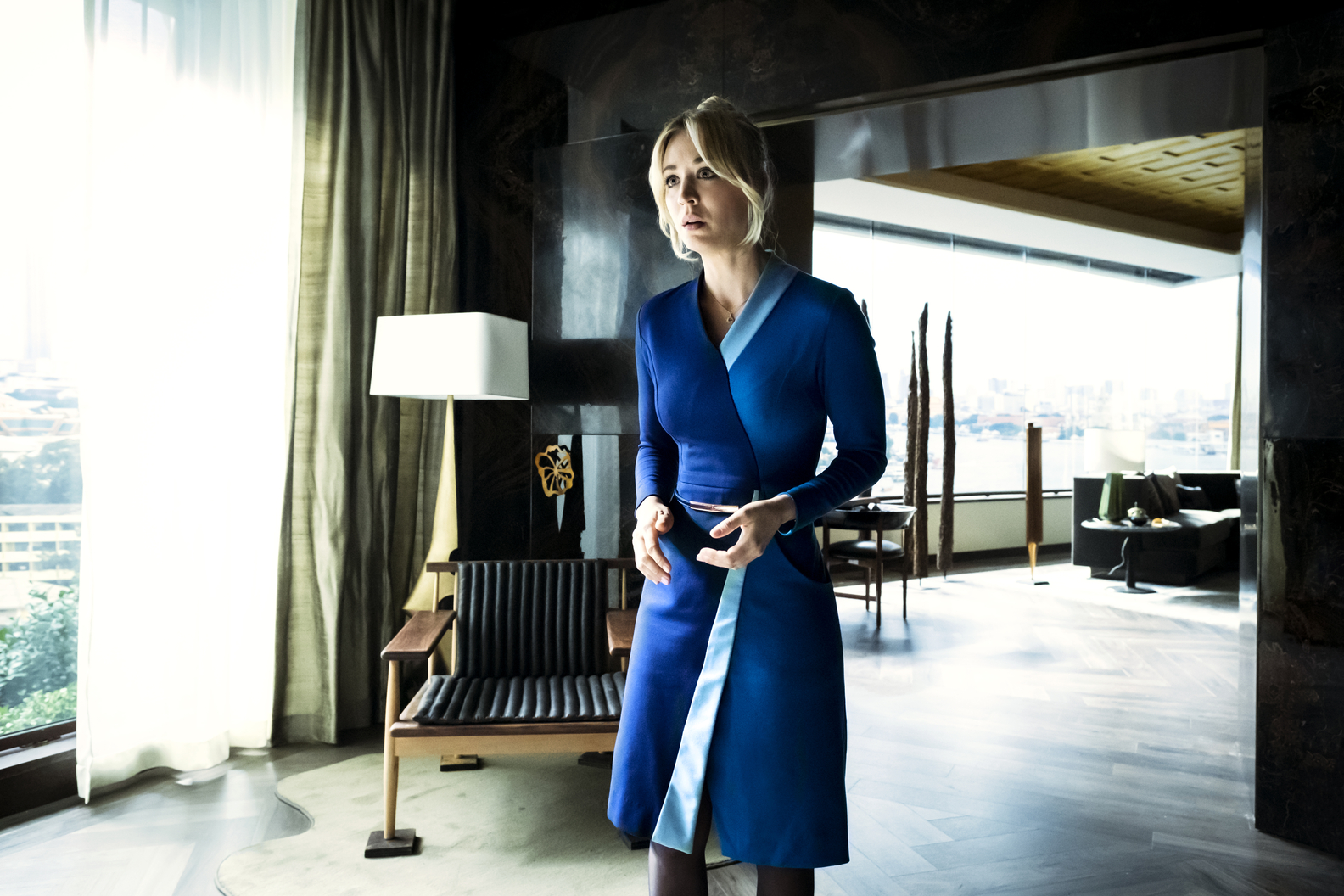 In this, it shares a kinship with much of Hitchcock’s filmography. You can see the same strong visual lines, labyrinthine and immense, in the layout of the cornfield Cary Grant is forced to run through in “North by Northwest” or, in an earlier moment, in how Hitchcock utilizes the design of the U.N. Headquarters to make his protagonist look like a rat in a maze.

The angled reflective surfaces that keep Cassie from running away from her problems (and from seeing herself clearly) share much with the big bay windows James Stewart can’t stop glancing through, physically unable to refrain from meddling in the lives of others in “Rear Window.” With all of these, the design visually evokes something true about the protagonist’s psychology while putting extra pressure on them, hemming them in.

Finding ways to use interiors to dramatize its hero’s interior life, creating spaces where it’s easy for characters to watch or be watched, is about as Hitchcock as it gets. But “The Flight Attendant” goes one step further, pulling in other influences. “We were also referencing works that were female-led, traumatic comedies that we were really excited by. And I think that balancing those two elements was really, really important,” White said.

As the show goes on, the suite becomes elastic, a mind palace for Cassie and Alex to sleuth out his murderer. The show does James Stewart one better and turns its windows into portals through which Cassie watches herself freeze under interrogation by the FBI; light fixtures flash and flare out in key moments of distress. The production finds ways to reinvent or reveal different parts of the room as the plot thickens.

“We definitely knew that we were going to have to be making changes throughout,” White said. “So, sliding panels, sliding screens, surprise doorways: those were things that I built in so that we constantly have opportunities. … I knew that everything I was bringing into the set would need to lend itself to change.”

Television has the luxury of time on movies, even Hitchcock ones. Each return to the suite, and each visual twist on its space, connects it to and builds on the audience’s understanding of Cassie: the series of bad decisions that made her look like the most likely suspect in Alex’s death, the shady machinations that actually may have got him killed, the long-held trauma behind much of her decision-making, and the healing (and romance?) possible through self-reflection. As the space (and the circumstances) she’s in finds new ways to pin her down, she keeps wriggling free, striding into a new space or pulling open a door we didn’t realize was there.

“We wanted to be able to let the audience see the way that she’d seen herself, which is sometimes hiding herself, sometimes looking at herself in a very idealized way, or vice versa,” White said. And the show establishes a subtle connection to other walking-disaster comedies like “You’re the Worst” and “Catastrophe” in each new return to the suite. Because what Cassie is really trying to escape from is herself, and the great suspense of “The Flight Attendant” is whether or not she’ll ever be able to walk out of that hotel room unscathed.

Love Island 2021: Georgia ‘wishes she was bisexual’ after Hugo dumping