Major was injured during a previous episode of BBC’s This Farming Life, which follows a number of farming families and the ups and downs of life in the countryside. Raymond is set to try to help Major with his recovery in Sunday’s episode, but the bull will be reluctant to get back to normal and an unhelpful detour will see extra trouble for Raymond.

The instalment takes place in the autumn time in the Highlands, and Raymond is forced to take a soggy detour to get Major back to the field of cows.

Major was injured following a brawl with another bull, Marshall. At the time, Raymond said: “It was a bit of a disaster last night, two bulls started fighting in the pen and it’s just gone crazy.”

Major was left a little worse for wear, having cut his legs and needing a trip to the vet.

But thankfully he has now recovered and is ready to get back to his job. 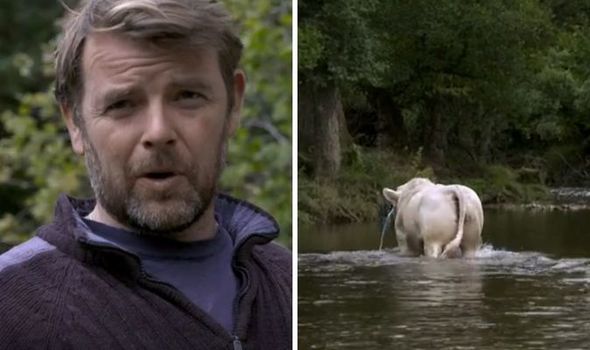 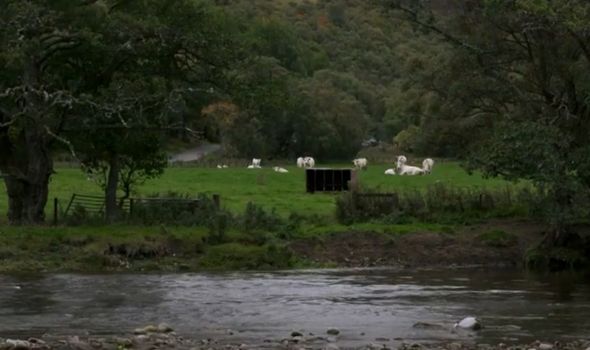 “I’m hoping he’ll see the girls over the water and he’ll just go ‘yes, happy days’,” Raymond said as he brought Major back to the field.

But as he called the cows over, Major wasn’t quick to move across the river.

“I’m sure he wants to go over there with the girls, but he’s just not sure,” said Raymond.

Soon Major ventures off, but his awkward way of crossing the water causes chaos for him and Raymond. 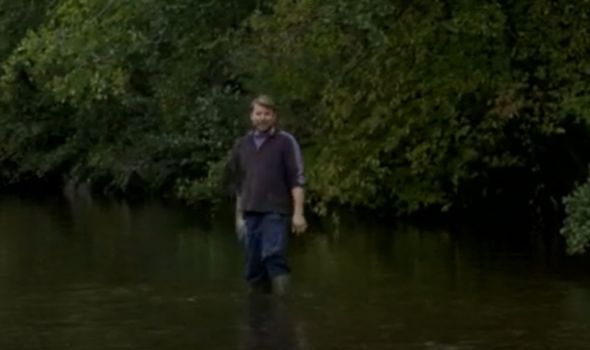 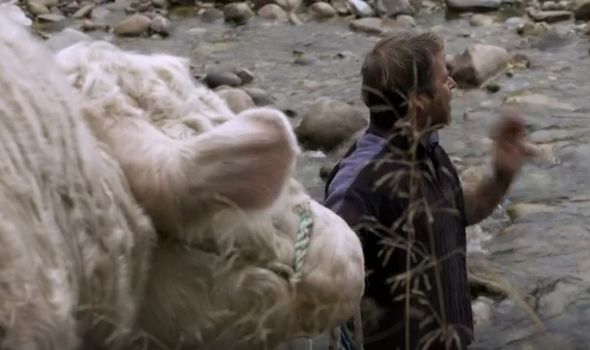 Finally, the bull went back to work was inspecting the female cows on the field.

Raymond commented: “He’ll check out all the girls now – he’ll be knackered by the end of the day.”

Elsewhere, Raymond and fiancée Jen take a busman’s holiday to Switzerland to help their friends gather their Valais blacknose sheep from the mountaintops, but their holiday turns into an Alpine adventure.

The series is in its third series and has gained a popular following.

One person recently took to Twitter to say: “I love #ThisFarmingLife. Following the highs and lows of the three Farms featured. It’s quite a tough life especially in rural Scotland.”

Another commented: “This Farming Life really draws me in!”

“I am just a little bit in love with this show. It makes me happy, sad, and very sad, but mostly happy. I have so much respect for the people who are doing this. It’s a lot of hard work. @BritBox_US @BBCTwo #ThisFarmingLife,” a third wrote.

Someone else said: “Lovely highland cattle on our walk today. Having avidly watched #ThisFarmingLife we made sure to check if they had calves before crossing field. Love them.”

“‘It’s family, it’s health and it’s wellbeing and without it you can’t do much else’ Love it @armadalefarm #ThisFarmingLife,” another penned.

A different fan posted: “Great series Matt, we love watching your family on the farm. Wishing you a great year ahead #farming #hardwork #ThisFarmingLife.”

One more echoed: “Absolutely love #ThisFarmingLife, again one of the best things on the tv right now.”

“I love this show #ThisFarmingLife What a joy to be able to peak in on all these farms. Tremendous,” commented another.

Also in Sunday’s episode, Kirsty and Aimee in Shetland go on a bumper sheep shopping trip to double their flock.

But buffalo farmer Steve is forced to make a shocking decision after some bad news.

This Farming Life airs Sundays on BBC2 at 7.15pm.