We’ve got questions, and you’ve (maybe) got answers! With another week of TV gone by, we’re lobbing queries left and right about dozens of shows including Money Heist, Riverdale, CSI: Vegas and And Just Like That!

1 | Did you laugh out loud when Money Heist‘s Palermo and Helsinki used all of those precise medical terms to update the medics on the health status of the soldier and Helsinki? (Either those two attended medical school or they watched a lot of ER.)

2 | Who do we have to call for a full version of Harlem‘s Get Out: The Musical on Broad?

3 | How funny is it that the one SEAL Team actress who played pregnant this season is the one (out of four) who isn’t actually pregnant in real life?

4 | How the hell could Yellowstone‘s Walker fight Lloyd at all, much less so fiercely, a day after being stabbed in the chest? How bad a boss is Jamie that his assistant didn’t warn him that he was walking into a meeting with Beth? And were those sparks flying between Kayce and Avery supposed to be there — because they sure were!

5 | The Walking Dead‘s Aaron… Fear‘s Alicia… World Beyond‘s Elton… Is there a rule we’re not aware of that states that every Walking Dead show is required to have a one-armed protagonist?

6 | Is it possible that Dexter: New Blood‘s Kurt Caldwell isn’t working (read: killing) alone at that cabin in the woods? And do you think we’ll see Angel Batista again this season, or was it a one-and-done appearance? Lastly, now that Angela knows “Jim” isn’t who he says he is, how do you think she’s going to react?

7 | The Rookie‘s gimmick this week of “filming” the episode almost entirely via body cams, shop cams, iPhones, security cameras…. Was it a touch annoying, or did you (somehow) not notice? Also, why have that sexy Halloween hook-up between Nyla and her ex only to have him turn right around and relaunch a prickly custody fight?

8 | Won’t rebranding “FX on Hulu Originals” as “FX Originals” only confuse audiences more about what does and does not air on FX’s cable network? 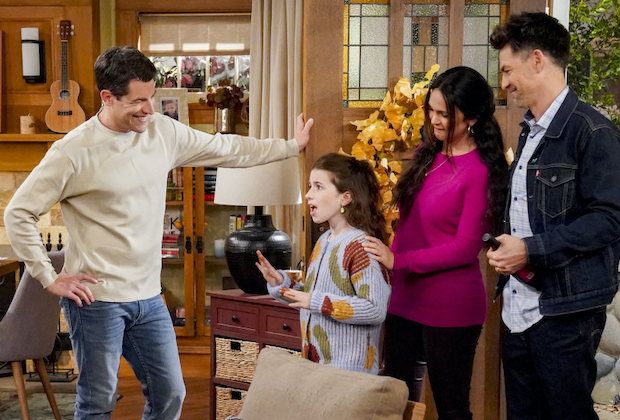 9 | How soon before Lilly Sanchez-Greenfield, the daughter of The Neighborhood‘s Max Greenfield, has her own show on Nickelodeon or Disney Channel?

10 | On The Bachelorette‘s “Men Tell All,” what was the point of talking about Tayshia’s breakup with Zac before transitioning to Rodney’s heartbreak? What, are Tayshia and Rodney supposed to date now?

11 | When would The Flash‘s Barry have learned about something like Damien Dahrk sacrificing his life to save his own daughter Nora? Is there an Arrowverse group text? Or, mayyyybe when Ray briefly visited?

12 | For all the hype that Riverdale‘s Sabrina appearance got, you’d think she’d stick around longer than a few measly minutes? 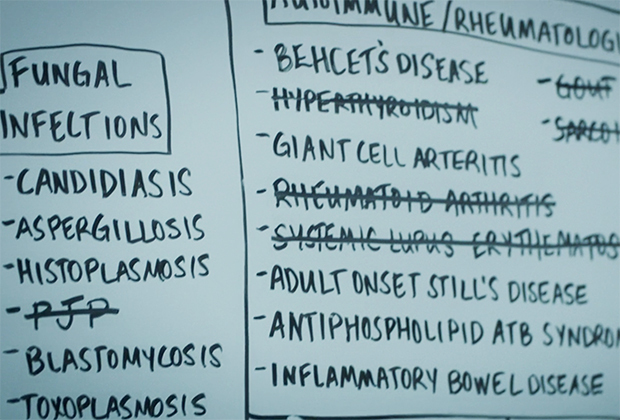 13 | Surely The Resident doesn’t expect us to believe that Trevor has handwriting this neat, right? Also, between the whiteboard brainstorming and the fleeting suggestion of lupus for a patient’s diagnosis, any other House viewers suddenly miss that show?

14 | Is Our Kind of People‘s Nikki/Lauren/Taylor love triangle starting to bore you? And which obligatory shirtless man excited you the most: Nate, Tyrique or Raymond?

15 | On Live in Front of a Studio Audience, why didn’t Gabrielle Union at least attempt Tootie’s uber-chipper voice? Why wasn’t Facts of Life vet Kim Fields credited on-screen upon her entrance, like fellow castmates Lisa Whelchel and Mindy Cohn? Why have Jon Stewart’s Carl “Rocky” Price get made fun of for his headgear, rather than his acne? (Is that considered less offensive in 2021?)

16 | We know Queens‘ ramen scene was trying to show us how unaccustomed to normal-people life Lil Muffin has become, but is anyone else kinda into eating the noodles raw? (What? They’re good!) 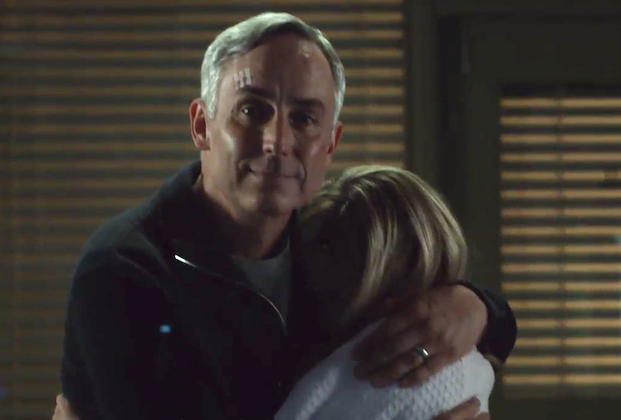 17 | On CSI: Vegas, was the actress who plays Hodges’ wife not available for this final scene? And can we agree that given the nature of Anson Wix’s lawsuit, there is no way Sara and Gil would be allowed to process him/gather DNA without tons of oversight?

18 | With mere days left before Christmas on Hawkeye, what epic Bishop Security holiday party planning could possibly be left for Kate to help her mom with? Also, how poor a physical match was Florence Pugh/Yelena’s masked stunt double?

19 | On Chicago Fire, considering it’s known as the Windy City, shouldn’t that Christmas tree have been better secured against the elements?

20 | Were you disappointed that Survivor‘s Danny and Deshawn didn’t try to flip the script to get Xander (and his idol) out of the game? 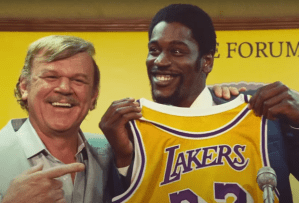 21 | After seeing how uncanny John C. Reilly looks as Lakers owner Jerry Buss in the trailer for HBO’s Winning Time, aren’t you glad that Adam McKay insisted that he play Buss instead of Will Ferrell?

22 | Do you think Sistas‘ Karen is telling the truth? Are you worried if she is, “Zatima” will suffer the consequences?

23 | We’re grateful to Legacies for bringing back another character from The Originals, but couldn’t it have happened before TVLine published our list of the year’s biggest surprise cameos? 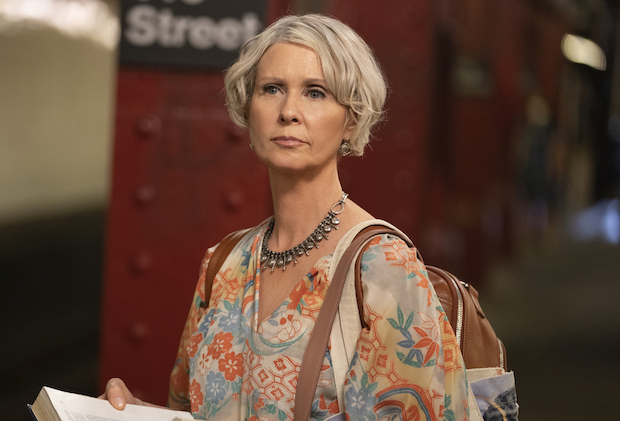 24 | And Just Like That spoilers ahead! Is there any way that Samantha would completely cut off her best friends over such a small slight, especially since we know what a loyal friend she is? Would Carrie’s friends really mourn [Spoiler]’s death so emotionally when none of them had any kind of relationship with him (besides disliking him)? And did we ever see a single Sex and the City scene set on a subway/subway platform, like this one from the premiere?

25 | Coming off of Hetty’s hilarious “possession” of Jay, which of the Ghosts would you like to next see get a chance at “living” again? (But definitely wait until Season 2, right?)

26 | How could Bull‘s Chunk promise that the trial would be wrapped on Christmas Eve? What if jury deliberations required more than a few hours? 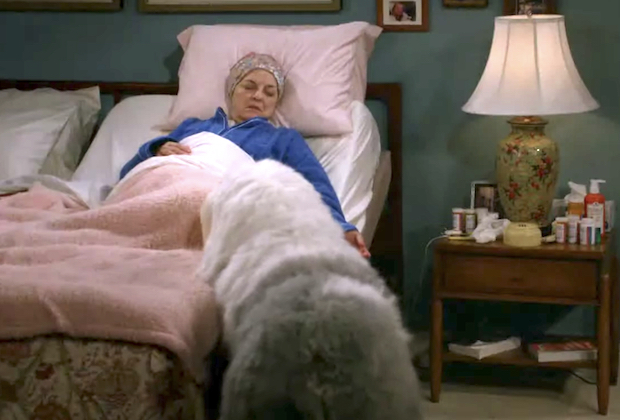 27 | As obvious as it was that B Positive‘s Meredith was about to take a turn for the worse, did hearing Cannoli whimper at her bedside still manage to leave a lump in your throat?

28 | On Law & Order: SVU, was anyone clear on exactly why Barba agreed to represent Richard Wheatley? And on Organized Crime, didn’t Elliot’s apartment seem a lot bigger than the last time we saw it?

Hit the comments with your answers — and any other Qs you care to share!

What was Bob Saget's cause of death?