Home » TV & Movies » Why Do We Love Watching Rich People Be Messy?

Television has often been a source of rest and relaxation for the masses; whether it’s sitting down and watching sitcoms, trashy reality TV, or syndicated broadcasts of tried-and-true rom-coms, time spent in front of our living room screens has helped provide relief from our at times bleak realities. While comic fodder and romantic tales are often the comfort binges of choice, in recent years, a new form of cathartic viewing has emerged from a seemingly golden age of television: the satirical saga of the filthy rich.

It’s not a new concept, of course. Shows such as Dynasty were some of the first to pave the way for series that center on the drama and spectacle of the upper class. In the last decade and a half of television, however, shows like Gossip Girl (the original) and Succession have perfected the art of showcasing the 1 percent’s self-absorbed delusion and the drama that can follow. In essence, watching the rich not just be rich but also be gloriously and categorically messy amid their personal and professional lives has become the addictive television fodder we just can’t get enough of. If any new series has perfected the art form of media critiquing the upper echelon, it’s HBO Max’s latest dramatic offering, The White Lotus.

The six-episode limited series is dubbed a “social satire” that showcases a group of affluent individuals—including a mourning middle-aged woman (Jennifer Coolidge), a depressingly incompatible pair of newlyweds (Jake Lacy and Alexandra Daddario), and your classic rich suburban family helmed by a girlboss-esque matriarch (Connie Britton, Steve Zahn, Sydney Sweeney, and Fred Hechinger)—as they attempt to enjoy a luxurious stay at an exclusive Hawaiian resort. While Gossip Girl and Succession analyze the lives of the wealthy through dazzling distractions (i.e., designer fashion or the waning allure of the media industry), The White Lotus is layered in its approach to highlighting the disconnect between the rich (and let’s be honest, rich white people) and the working class. 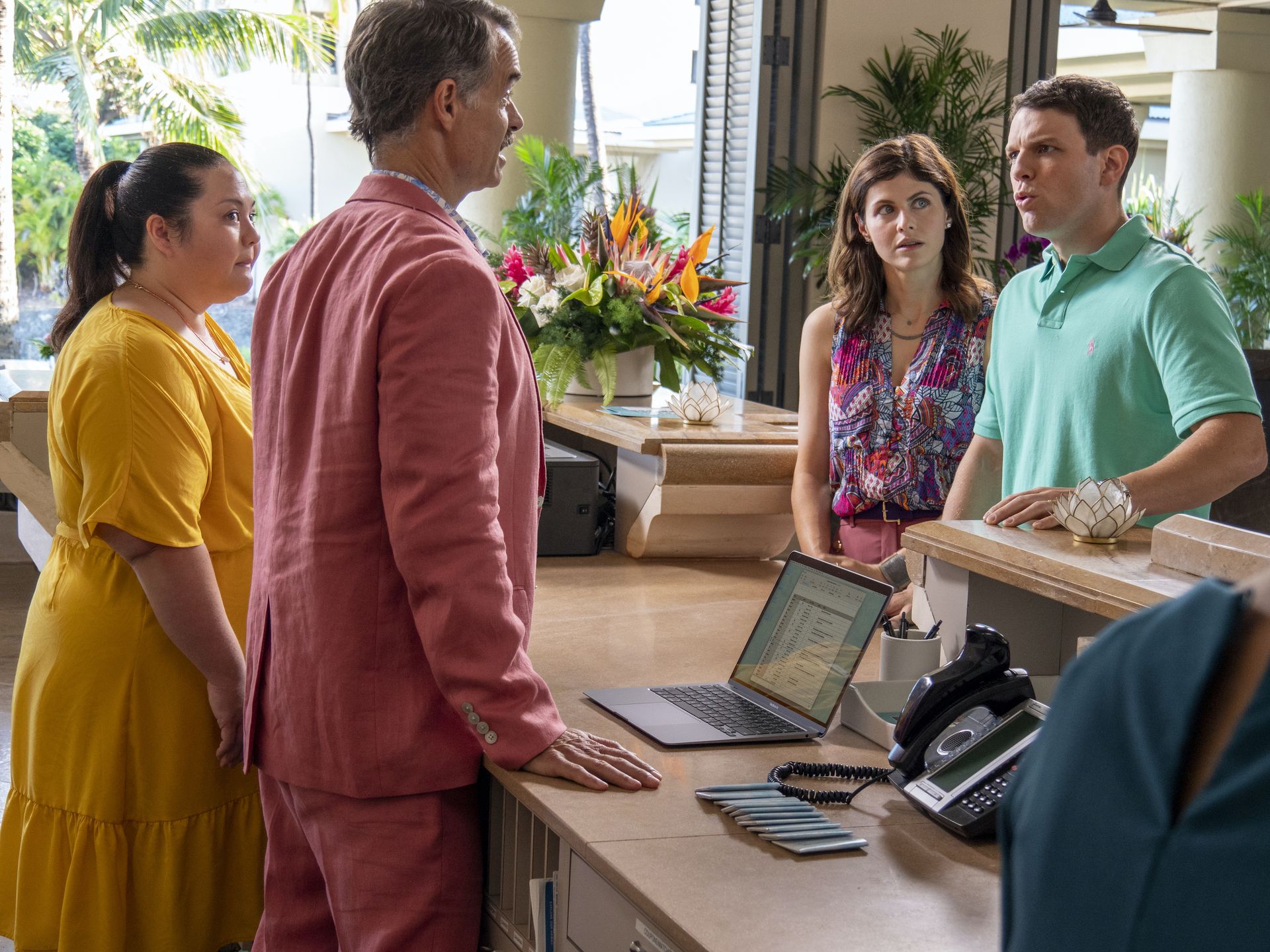 While the show’s setting in and of itself is controversial (Hawaii’s rich cultural history has been compromised for the sake of tourism and capitalism over the years), inequality is showcased most blatantly between the guests and the resort employees. It’s evident in scenarios such as Jennifer Coolidge’s Tanya overly relying on Natasha Rothwell’s Belinda, a Black, hardworking spa manager and hopeful spiritual adviser, to help guide and emotionally support her in the aftermath of her mother’s passing; and Jake Lacy’s Shane being oblivious to a new hotel hire sweating and biting her lip in agony (because she’s in labor!) as he commiserates over not being given the correct luxury suite. It’s Steve Zahn’s Mark questioning the point of wokeness and wondering when white men became the bad guys, and his wife, Connie Britton’s Nicole, pondering why it’s popular to hate Hillary Clinton now. It’s Alexandra Daddario’s Rachel feeling trapped in her new marriage, because her rich husband insists that she doesn’t need to forge a career of her own—the former being completely unaware of the privilege she has as a white woman with the agency to walk away from a guaranteed life of comfort.

The characters’ aloofness to actual reality is hilarious, although in a heartbreaking way. Aside from some of the show’s more over-the-top moments (like new employee Lani giving birth in an office at the resort or the resort’s general manager, Armond, doing … something else in that same office), the brow-raising lines that the cast quips throughout the six released episodes aren’t conversations we haven’t heard before. If anything, The White Lotus hyper-focuses on how the affluent exist in our realm. Whereas most of the time, the rich are rarely checked for their lack of awareness in real life, at least for about an hour every Sunday, we can enjoy witnessing the lives of the wealthy delicately crumble. Does that make us a bit morbid? Maybe. 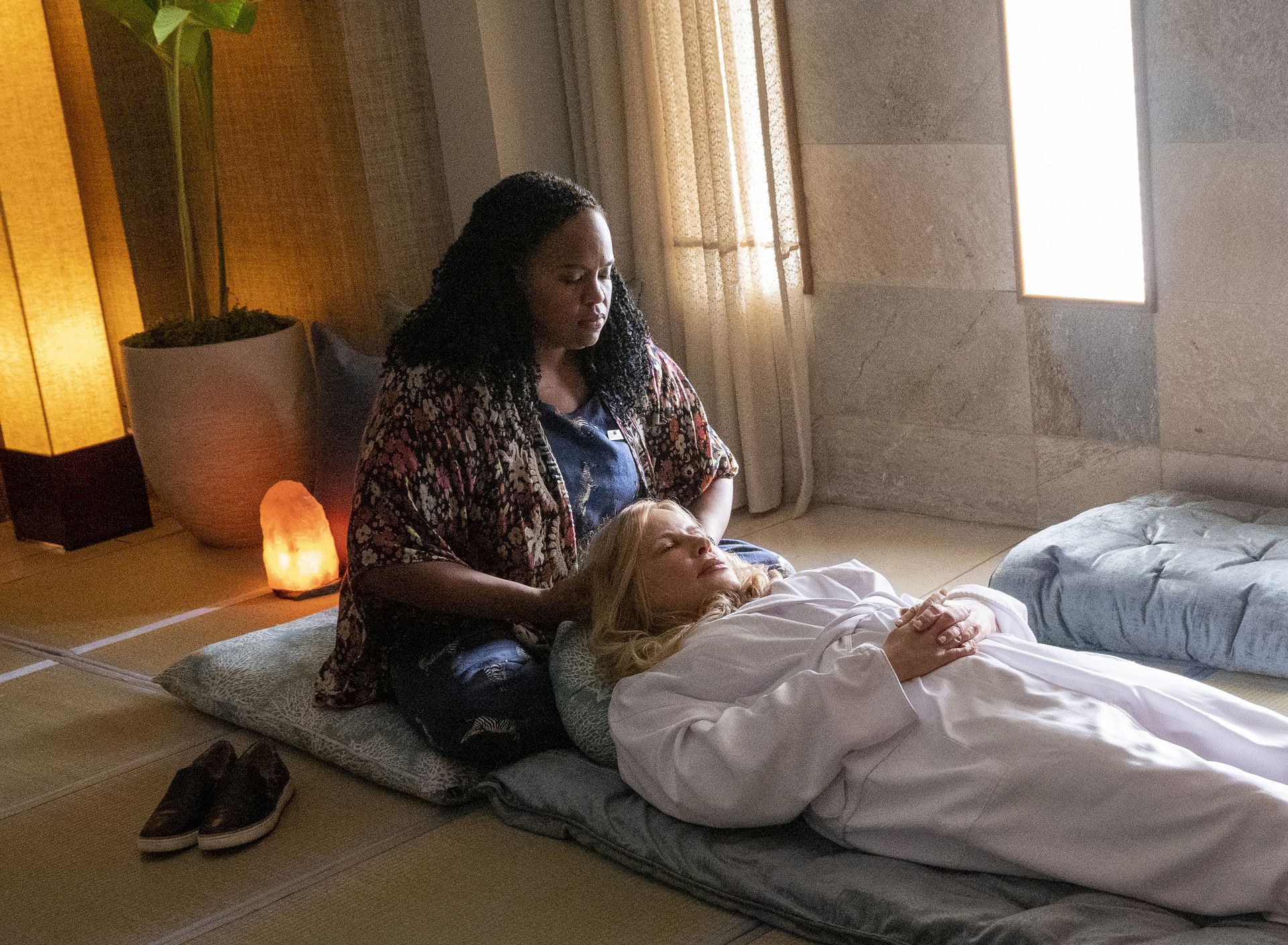 A reflection of society, The White Lotus wrestles with the idealism of the rich and the issue of wealth disparity that plagues the globe. While Gossip Girl toyed with the idea of excessive wealth being aspirational and filled with perks like designer handbags, bottomless martinis, and charity galas, today you’re more likely to see #EatTheRich trending on social media—especially as we enter a post-COVID society. The American Dream has shifted from aspiring to have it all to ensuring all of us have enough—and questioning why certain groups apparently deserve it more than others. Our fascination with the rich is waning, whether anyone wants to admit it or not, and when real-life power players are slow to adapt to the changing culture surrounding wealth, we’ll settle for seeing fictional characters reap the consequences on TV.

The White Lotus simultaneously showcases the worst aspects of wealthy whiteness and ranks as HBO Max’s newly reigning binge watch. Why? We’re over the idea of excessive wealth, but we’ve yet to grow out of watching the wealthy suffer under the circumstances of our normal reality. And based on the series having been officially renewed for a second season (with a whole new cast, on a whole new resort, reportedly), we’re not quite done witnessing the absurdity of tropical vacation-interrupting Zoom meetings with China, $75,000 sorry-I-cheated bracelets, and paid-in-full, whirlwind nuptial regret. Those are rich-people problems after all—and a fantasy most of us will never know.

Buffy the Vampire Slayer spoilers: Who does Buffy end up with?