Watching the newest version of “The Lion King” — a big-screen celebrity-voiced musical trying its best to look like a television nature documentary — I recalled a line from John Gregory Dunne’s 1969 book “The Studio” that may be my all-time favorite sentence in the annals of movie writing. “Six months were devoted to teaching Chee Chee the Chimpanzee how to cook bacon and eggs,” Dunne wrote, referring to a character in “Doctor Dolittle,” one of many real animals cast in that big-budget, family-friendly musical spectacle.

Dunne was pounding the pavement on the 20th Century Fox lot at a time of political tension and social fracture, when the Hollywood studios seemed to be facing an existential crisis. Pretty much like now, in other words, except that the money and ingenuity those studios used to spend on things like teaching chimps to make breakfast now go toward turning lines of code into fur and sinew. This is undoubtedly an ethical improvement, much as Chee Chee may have enjoyed hanging out with Rex Harrison. The hope behind this “Lion King,” opening July 19, is that advancing digital technology will also enhance the luster of the moviegoing experience.

It does and it doesn’t. There are a great many impressive moments in this film, and a few that might elicit a gasp of amazement or an appreciative burst of laughter from even a jaded viewer. For example: when Pumbaa, the flatulent warthog voiced by Seth Rogen, absent-mindedly scratches his left ear with his hind leg, I confess that I nearly wept. Not because the scene was especially touching or sad, but because of the sheer extravagant craft that had clearly gone into rendering those two seconds of reflexive animal behavior. I was nearly as moved by the efforts of a dung beetle to propel a ball of scat across a patch of desert. The digital artisans responsible for these images didn’t necessarily have to do it all with such fanatical care, and the fact that they did is surely worthy of admiration.

So if a movie could be judged solely on technique, “The Lion King” might qualify as a great one. And it kind of wants to be judged that way — for its technical skin rather than its dramatic soul. The opening sequence (it doesn’t seem right to call it a “shot”) fools the eye in subtle and brazen ways. You might think there are real creatures mixed into the computer-generated menagerie (there aren’t), but at the same time the flights of animal choreography lie beyond the skill of any trainer. Then the music starts, and it’s “The Circle of Life” and baby Simba is cute enough to make all the trolls on Twitter go awwwww.

The mixture of coziness and, well, awe in that opening number is as on-brand as anything Disney has done since — I guess since a few weeks ago, when it released “Toy Story 4.” Once the voices start up, we are in a comfortable and familiar pop-cultural space, even if the talking beasts don’t look much like cartoons. (A possible exception might be Zazu, the hornbill who sounds like John Oliver. Or maybe it’s just that John Oliver looks like a hornbill.) The antelopes lope. The elephants lumber. The graceful lions bask in their languorous power, lolling and growling and setting up the parameters of the story. 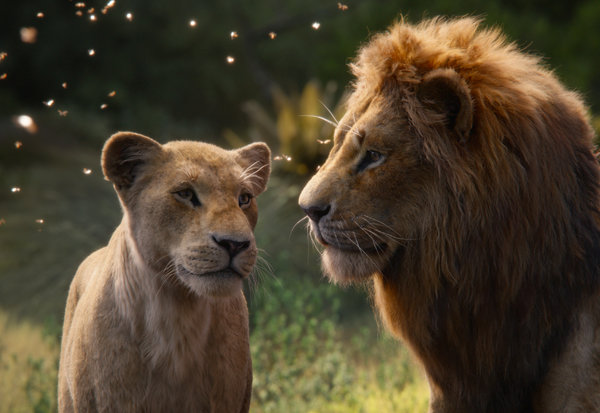 Not many surprises there. Simba’s father, Mufasa (James Earl Jones), rules the savanna with a gentle paw and a loyal queen, Sarabi (Alfre Woodard). Mufasa’s brother, Scar (Chiwetel Ejiofor), is the snake in this garden, scheming first to kill Simba, the rightful heir to the throne, and then to get rid of Mufasa. Scar has the help of Shenzi (Florence Kasumba) and her army of hyenas, whose closed-up, predatory faces are genuinely scary, especially when they appear for the first time.

Small children may have some trouble at that point, and also with Scar’s ruthless political machinations, which are pretty murdery for Disney. But it’s likely that much of the audience, young and old, will have some familiarity with the narrative, whether from the 1994 animated feature or from the long-running, much-loved Broadway show. “The Lion King” currently under review isn’t meant to replace or outdo either of those, but rather to multiply revenue streams and use a beloved property to show off some new tricks. A lot of people will go, expecting to like what they see, and for the most part they won’t be disappointed.

I said earlier that the movie, which was directed by Jon Favreau and written by Jeff Nathanson, looks like a nature documentary. But it plays more like an especially glitzy presentation reel at a trade convention, with popular songs and high-end talent pushing an exciting new product that nobody is sure quite how to use. Simba and his best friend, Nala, voiced as cubs by JD McCrary and Shahadi Wright Joseph, grow up into Donald Glover and Beyoncé, and when they get going on “Can You Feel the Love Tonight …”

It’s O.K. When Pumbaa and his pal Timon the meerkat show up — I’m not going to stir up trouble by saying which one might be the other’s sidekick — we get a brisk vaudevillian double act from Rogen and Billy Eichner. That’s O.K. too. But of all the second-golden-age Disney animated features, the original “Lion King” is the most Shakespearean, as well as being the most ideologically coherent Hollywood defense of monarchy until “Black Panther.” The grandeur and intimacy, the earthy humor and heavenly songs have given it gravity and staying power.

Those are somehow missing here. The songs don’t have the pop or the splendor. The terror and wonder of the intra-pride battles are muted. There is a lot of professionalism but not much heart. It may be that the realism of the animals makes it hard to connect with them as characters, undermining the inspired anthropomorphism that has been the most enduring source of Disney magic.

Real lions don’t sing — not even like Beyoncé — and don’t actually govern other creatures. The closer the movie gets to nature in its look, the more blatant, intrusive and purposeless its artifice seems. It might have worked better without songs or dialogue: surely the Disney wizards could have figured out how to spin an epic tale of royal succession and self-discovery through purely visual means. Or else someone could have spent a few months teaching the digital Pumbaa to whip up a nice tofu scramble.

Rated PG. Not too red in tooth and claw. Running time: 1 hour 58 minutes.

When you purchase a ticket for an independently reviewed film through our site, we earn an affiliate commission.

A.O. Scott is the co-chief film critic. He joined The Times in 2000 and has written for the Book Review and The New York Times Magazine. He is also the author of “Better Living Through Criticism.” @aoscott